You Can Teach an Old Dog New Tricks

Having a little more free time here on a cold winter day at the first of the new year, I have been visiting my garden blogging friends online in the comfort of my nice warm home.   David at Tropical Texana has inspired me to try my hand at making a photo collage.   Like David, I too have been admiring the collages of so many other bloggers; but since I am a bit of a techno-dinosaur, I had no idea how these collages were made.

After doing a little research online, I came upon piZap.com, a free online photo editing program.    It was really easy.   No program to download.  I just clicked on the photo collage section of the program, chose the layout of the collage (and there are many choices), uploaded the photos from my computer photo files, saved the finished collage to my photo file, and then uploaded the collage to my blog. 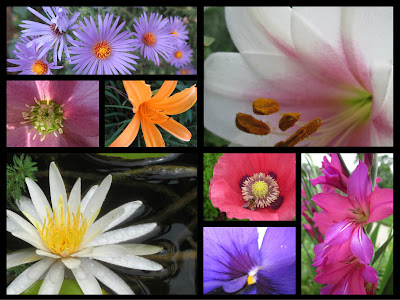 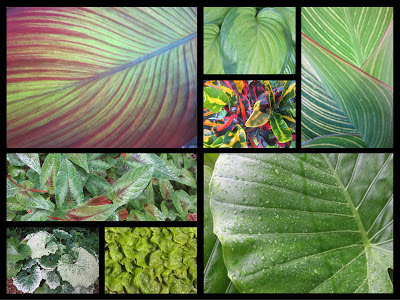 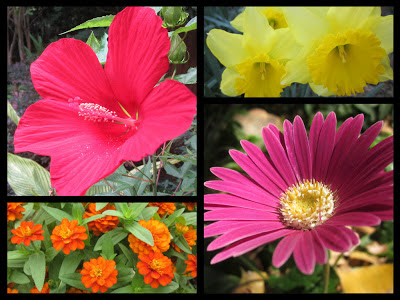 I hope someone inspires you to learn something new today...

2012 Review of a Favorite View

Les from A Tidewater Gardener has encouraged us to post some of our favorite photos from 2012.   Offering a little bit different take on the subject, I decided to post a photo from each month of one of my favorites views in my garden last year.

In January I installed my new fountain to the front beds after having a large crape myrtle removed.  This picture shows more of the fountain than the beds, but you can see that my garden is mainly dormant this time of year.

Apparently in February I was too busy building my new potting bench to take a picture of my garden, so this is a picture from mid March.  The garden is starting to wake up with wildflowers and perennials.  The turf grass is starting to green up and the daffodils are beginning to bloom, signaling that spring is here! 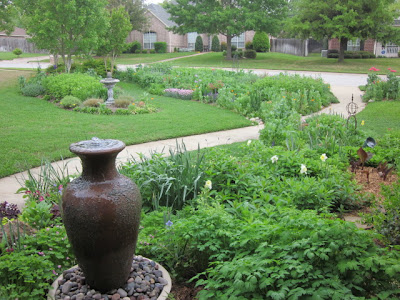 This photo was taken in late March.  The grass is nice and green now after spreading compost over the lawn.  The wildflowers are really growing, and I see the poppies are just beginning to bloom.  The Columbines near the fountain are lush with foliage but no blooms yet.  The 'King Humbert' Cannas are starting to pop out of the ground.   'May Night' Salvia and 'Bath's Pink' Dianthus are early blooming perennials. 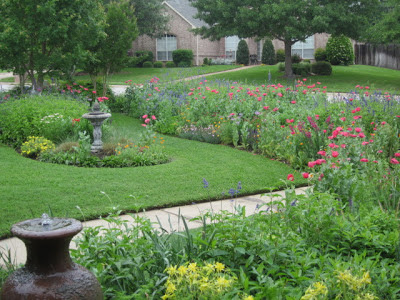 In April the poppies and larkspur are in full bloom.  The Columbines are now in bloom, as well.   In the right center of the picture I see the Byzantine Gladiolus are blooming.  Ox-Eye Daisies, Calylophus, and Salvia farinacea are also in bloom.

By late May the Cannas are full grown, the Bee Balm is in full bloom, and the Summer Phlox are just beginning to bloom.  I can see the 'Walker's Low' Catmint blooming in the upper left of the photo, also.


Now in mid June the Summer Phlox are in full bloom.  Also blooming this time of year are the peach daylilies (near the bird bath)  that were a gift from a friend many years ago.  The Cannas, Coneflowers, Catmint, and Salvias are in bloom now, too.

In mid July, as the Summer Phlox is fading, the Rudbeckia 'Goldsturm' is blooming strong.  All of the Salvias are in bloom, and the Cannas are standing tall.  The fountain is becoming engulfed by flowers in the front and by the foliage of Caladiums and Wood Ferns in the shady spot behind the fountain

In late August, the Rudbeckias have gone to seed, but the Salvias are still going strong.  After being chewed to smitherines by grasshoppers, I cut the Cannas to the ground and they are starting to regrow.  The 'Hameln' and 'Karley Rose' fountain grasses are starting to plume.  Yellow and orange color from reseeding annuals of Melampodium and Cosmos add summer color.

By mid September, the Cannas have recovered from their cutting, adding bold foliage to the garden again.  The garden is still full of color through Salvias and reseeding annuals, but it is somewhat faded after the summer's heat.   You can see that the sidewalk is wet from welcomed rains after a long hot summer.

Color returns in October as the temperatures start to cool.  The 'Regal Mist' Muhly grass near the bird bath is taking on its trademark pink cloud of plumes. The Lindheimer's Muhly is also starting to plume.  The Cannas are putting on blooms again.  The pink Salvia greggii, one of my favorite perennials, is in full bloom now.   Mexican Milkweed was in full bloom to welcome the Monarchs, but unfortunately I did not see many this year.   The fountain is barely visible as the ferns continue to grow.   October was really one of the prettiest months in my garden this year; however, it was also one of my busiest months, so unfortunately I did not post any pictures of my garden this month.


In late November, the garden starts to move toward dormancy.  The 'Fire Dragon' Shantung Maple tree in the upper left has taken on fall color as the garden begins to fade some.   That crazy Canna is still going strong, as are the Salvias, the workhorses of my perennial garden. 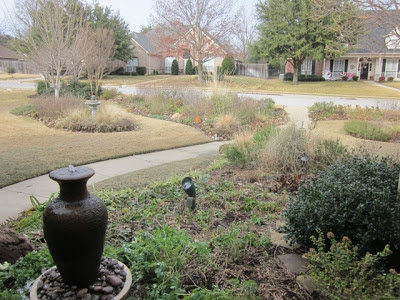 And finally, at the end of December, after several hard freezes and snowfall over Christmas (sorry, no photos since I was out of town during the snowfall), the garden has taken on its winter bones and texture, and the turf grass returns to dormancy.  After cutting back some of the spent perennials, the fountain is visible again.

I hope you have enjoyed this year-long look at one of my favorite views of my garden.     As 2012 is fading out of view and we look ahead to the new year, I wish you all a very happy 2013!

Happy Gardening in the New Year... 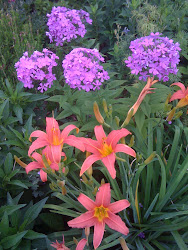 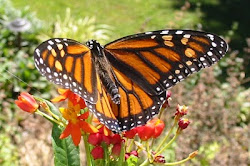 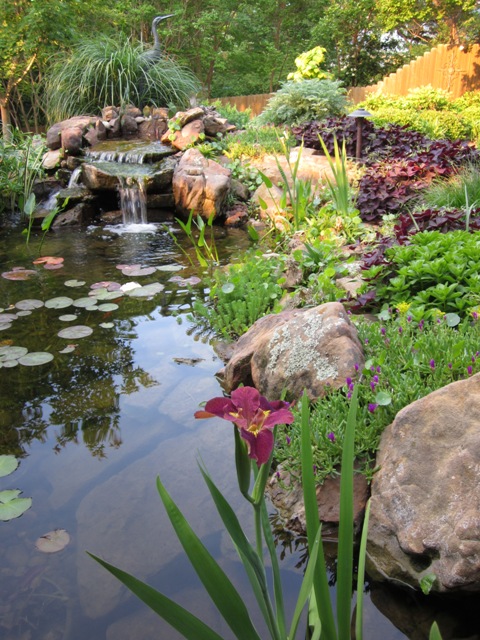 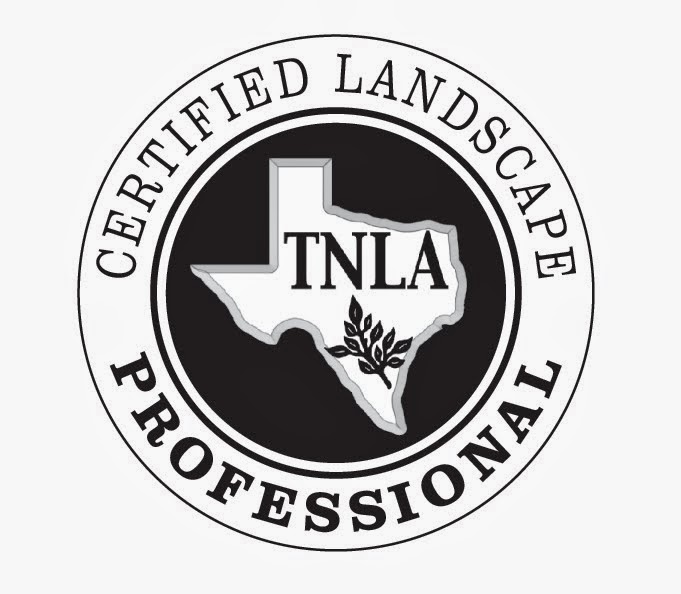 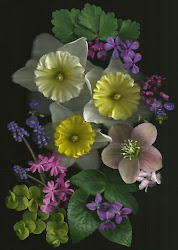 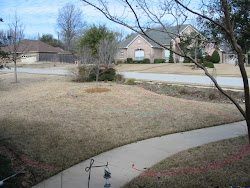 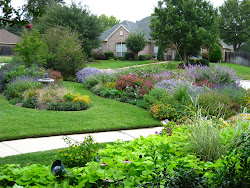 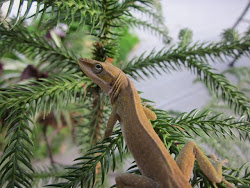 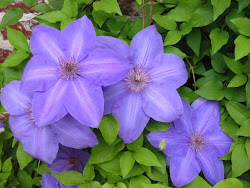 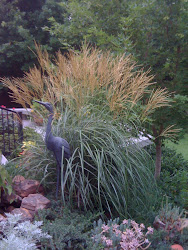 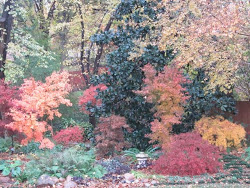 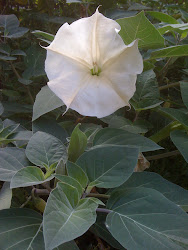 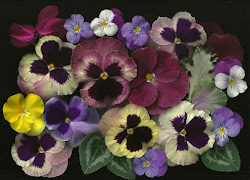 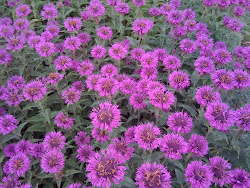 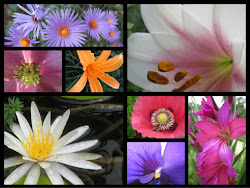